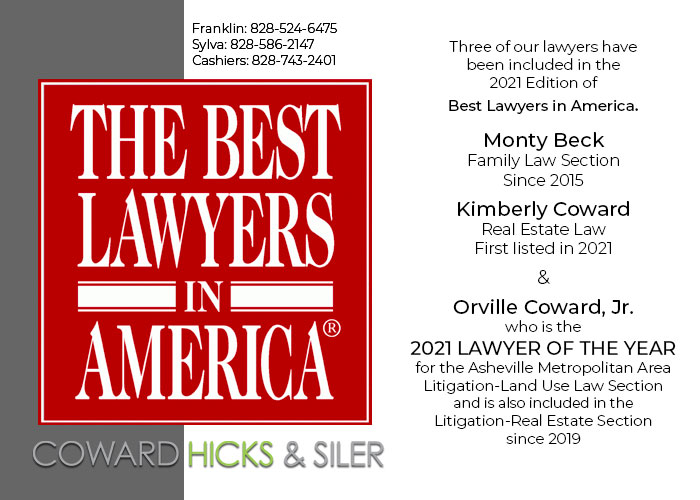 We are pleased to announce that Monty Beck, Kimberly Coward, and Orville Coward have all been included in the 2021 Edition of Best Lawyers in America. Additionally, Orville has been named the Land Use and Zoning Law Section’s Lawyer of the Year for the Asheville Metro Area. Together, these three partners form the entirety of lawyers listed in North Carolina west of Asheville. Best Lawyers© compiles a list of outstanding attorneys across the country through exhaustive peer-review surveys by other recognized lawyers. For more information about Best Lawyers methodology, click here: https://www.bestlawyers.com/methodology.

Orville Coward – 2021 Lawyer of the Year

Orville D. Coward, Jr. began his practice with his father and uncle in 1979 as a trial lawyer. Committed to involvement in the legal community, Mr. Coward served as President of the 30th Judicial District Bar (2001-2002), on the Board of Directors for Western North Carolina Legal Services (1986-2004), as a member of the U.S. District Court Western District North Carolina Rules Advisory Committee (1997-2000), and as a member of the North Carolina State Bar Special Committee on Real Estate Practice (1997-1998). Orville is headquartered in the Franklin office.

Established in Sylva in 1951, Coward, Hicks & Siler, P.A. is among the most broadly-respected firms in Western North Carolina, offering the talents of seven attorneys in three locations: Sylva, Cashiers, Franklin. A general litigation firm, our lawyers focus their practices in the areas of family law, real estate transactions, and litigation, including eminent domain, environmental law, and resource management matters, estate planning and administration, corporate law, and Indian law.