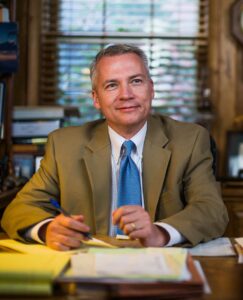 We are pleased to announce that family law partner Monty C. Beck has been appointed Chief Judge of the Cherokee Court, the Trial Court for the Eastern Band of Cherokee Indians. He was appointed by Principal Chief Richard G. Sneed and confirmed by Tribal Council to a six-year term of office beginning April 1. Please join us in congratulating Monty on this prestigious and important appointment.

“It’s an honor to be selected to serve the Cherokee Court in this capacity”, says Beck of this appointment. “The opportunity to serve a sovereign nation fully situated within our state will be challenging and important work.”

Monty Beck is a North Carolina Board Certified Specialist in Family Law. He earned his law degree from Campbell University School of Law in 1984. His undergraduate in Criminal Justice Administration is from the University of North Carolina at Chapel Hill. Having dedicated his entire career to serving people throughout the mountains in the Western reaches of our state, Monty is an AV Preeminent Peer Rated Lawyer from Martindale-Hubbell and has been continuously named to North Carolina Super Lawyers™ and Best Lawyers in America. For many years, he has been the only lawyer west of Asheville to hold all three of these peer review distinctions.

“Monty will be missed. When I joined the firm as a 25-year-old “legal baby”, he was an encouragement to me of how to be a good lawyer,” says Kim Coward of the firm’s Cashiers office. “He was smart, even-tempered, and thoughtful, as a good lawyer is. He lead by example. He worked hard. He managed aspects of the firm. He became a board certified specialist which is not easy, and in fact, was one of the first of us out “west”! He is a rock-solid lawyer, person, and friend. Yes, Monty will be missed, but he left his mark and encouraged all of us to be our best. That will live on at Coward, Hicks & Siler, PA.”

Established in 1951, Coward, Hicks & Siler, P.A. is among the most broadly-respected firms in Western North Carolina, offering the talents of five attorneys in three locations: Sylva, Cashiers, and Franklin. Over its 70 year history, the firm has fostered from within its ranks judges, bar presidents and committee chairs, and political and community leaders. Monty’s appointment amplifies this long-standing history of excellence.

A general litigation firm, our lawyers focus their practices in the areas of real estate transactions and litigation including eminent domain, environmental law, and resource management matters, estate planning and administration, corporate law, and Indian law.

The main content of this site is updated as necessary to ensure accuracy. Blog posts are accurate as of the date of publication and are updated with new posts in the event of changes in the law. All material found on this website is primarily intended for the purpose of marketing, and to allow visitors to compare the services offered by Coward, Hicks & Siler with those offered by similar law firms.